Hotels in the centre of Lisbon 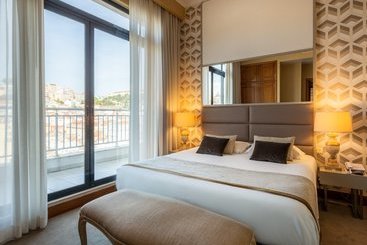 This city hotel is located just a few minutes from the centre. There are various shops, bars, restaurants, nightclubs and...

Lisbon possesses a special enchantment that must be discovered step by step. Its seven hills and its location at the mouth of the Tagus River attracted the Phoenicians in 900 BC, although the true golden age of this city came with the Era of the Discoveries in the 14th and 15th centuries. Despite the terrible earthquake of 1755 that destroyed nearly all of Lisbon, necessitating the reconstruction of the area of Baixa, the city soon recovered its joyful spirit, and today offers a dynamic combination of history and modernity.

In Baixa sits the monumental Plaça do Comercio, whose front door opens upon the Tagus River, as well as the Arc of the Triumph of 1875 under which passes the commercial thoroughfare of Rua Augusta. From Rua dos Sapateiros, ascend to the animated Barrio Alto (High District) and the elegant district of Chiado in the famous Neo-Gothic style elevator of Santa Justa , constructed entirely from iron - at the top it offers wonderful views of Lisbon. At the end of the street is Plaça de Rossio or Plaça de Dom Pedro IV in which lie the Palace of Independence; the Doña Maria II National Theater; the Rossio Train Station Neo-Manueline façade; and the Nicola Café. Further north is Plaça de los Restauradores, which is surrounded by emblematic buildings, such as the Foz Palace, the Éden Cinema with its Art-Decó façade, and the modernist style Counts Cinema. In Avenida de la Libertad, and Marquês de Pombal Square, distinguished buildings follow one after the other, forming an elegant commercial and enterprise zone.
We come now to Alfama, the oldest district of Lisbon. Among its narrow and winding streets reside the Castle of San Jorge; the imposing Monastery of San Vicente de Fora; the Church of Santa Engracia with its showy cupola; the medieval Cathedral of Lisbon known as La Sé; and the particular Casa dos Bicos with its diamond-pointed stones and irregular distribution of doors and windows.

Finally, do not leave Lisbon without taking in Belem and sparing a thought for the journeys that embarked from there towards other worlds. The harbors defensive manuelino-style Tower of Belem, the Monument to the Discoverers, and the majestic Monastery of the Hieronymites are the main attractions here.
See more See less

It depends on the category of the hotel. If you want to stay at a 4-star hotel in Lisbon, the average price per night is €39, while you will pay an average of €33 for a 3-star hotel, and in a more luxurious 5-star hotel, you"ll pay around €80.

You can make reservations at Hotel Olissippo Lapa Palace, Hotel Heritage Avenida Liberdade and Hotel Avenida Palace if you"re looking for a hotel with valet service for your visit to Lisbon.

The best hotels in Lisbon for adults only are WC by The Beautique Hotels and Bed and Breakfast Residencial Caravela.

According to our clients, if you´re travelling with children, the best hotels in Lisbon are Hotel Lisboa Central Hostel, Hotel Heritage Avenida Liberdade and Hotel Olissippo Lapa Palace.

If you want to save time, the hotels in Lisbon with express check-in and check-out are Hotel Alif Avenidas, Hotel Corinthia Lisbon and Hotel Bairro Alto.

Some of the options for hotels with non-smoking rooms in Lisbon are Hotel Heritage Britania, Hotel Olissippo Lapa Palace and Hotel Lisbon Calling Hostel.